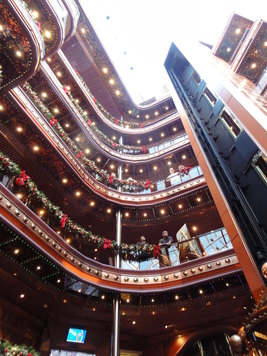 Have you ever had a cruise turn out nothing like you initially expected?  That was our experience aboard the Carnival Elation. When we first stepped on the ship, we were decidedly underwhelmed.  Granted, a Carnival Fantasy-class ship without most of the Evolutions of Fun upgrades is not anywhere near the top of the list of impressive ships. Add to that a ship that is only a few people short of full capacity (meaning many kids), and it looked like this cruise would be one to "make the best of" rather than truly enjoy. Boy, was I wrong! The service and crew aboard the Carnival Elation made this experience one to remember. But, let's get into the details so that you can decide for yourself if this cruise would work for you.

The Elation is in the Fantasy class, Carnival's largest class, with ships that clock in around 70,000 gross tons. All the ships in this class except for the Elation and the Paradise recently received all of the Evolutions of Fun upgrades which include a brand new Waterworks area, adults-only Serenity deck, sports deck, redesigned halls and staterooms and many more smaller upgrades around the ship. The Elation and Paradise are the two newest ships in the class, and are scheduled for the new Fun Ship 2.0 upgrades which include Guy's Burger Joint, Red Frog Rum Bar, Blue Iguana Cantina and much more. (in 2014) What results is a ship which has some of the smaller upgrades like the Serenity Deck and new deck furniture, but has that old styling and old waterslide.

The ship is not entirely disappointing:  the atrium is very pretty, the new deck furniture looks great, the fitness center is outfitted with brand new machines, and the various lounges off the Promenade are very nice.  It probably helps that this ship in particular had a decent design to start with.  Based on literary figures (and other random people thrown in), you have bars like the Jekyll and Hyde and the Romeo and Juliet. So, you aren't dealing with one of Joe Farcus' more outlandish themes. (Carnival architect) There is no lower Promenade deck like on most ships due to the lifeboats being suspended above the upper decks, and what results is that the ship really doesn't open up space wise until deck 8 or so. Below that, you are pretty much faced with neverending halls of burnt orange and bad light fixtures.  Once we began to really learn the ship, the layout made more and more sense.  Deck 8 features the dining room and the main show lounge, along with the shops. Deck 9 is the aforementioned Promenade deck with lounges, casino and the larger lounge (The Cole Porter Lounge), utilized for comedy shows.

One final note about design and upgrades, Cruise Director Steve Knisley told us that when this ship receives the 2.0 upgrades, it will also finally be retrofit with the Evolutions of Fun upgrades as well.  He said that ship would be "practically gutted" with entirely new stateroom designs and more.  I predict that once this ship has been overhauled, it will be one of the most desirable small ships of Carnival's fleet.

Staterooms are good sized, especially compared to their counterparts in other cruise lines.  Even the lowest priced room starts at 185 sq. ft.  I can't say that the space is utilized entirely well, with no couch and only a small stool in the corner, but the bathrooms are quite large by cruise standards.  It was the first cruise ship shower I have ever seen that could fit two people.  The styling is, in my opinion, terrible, but you can judge for yourself by the picture below. The television was an old picture tube, and even the phone was older.  (There was no messaging system built in.) But, the beds were comfortable and the cabin stewards kept it spotless. 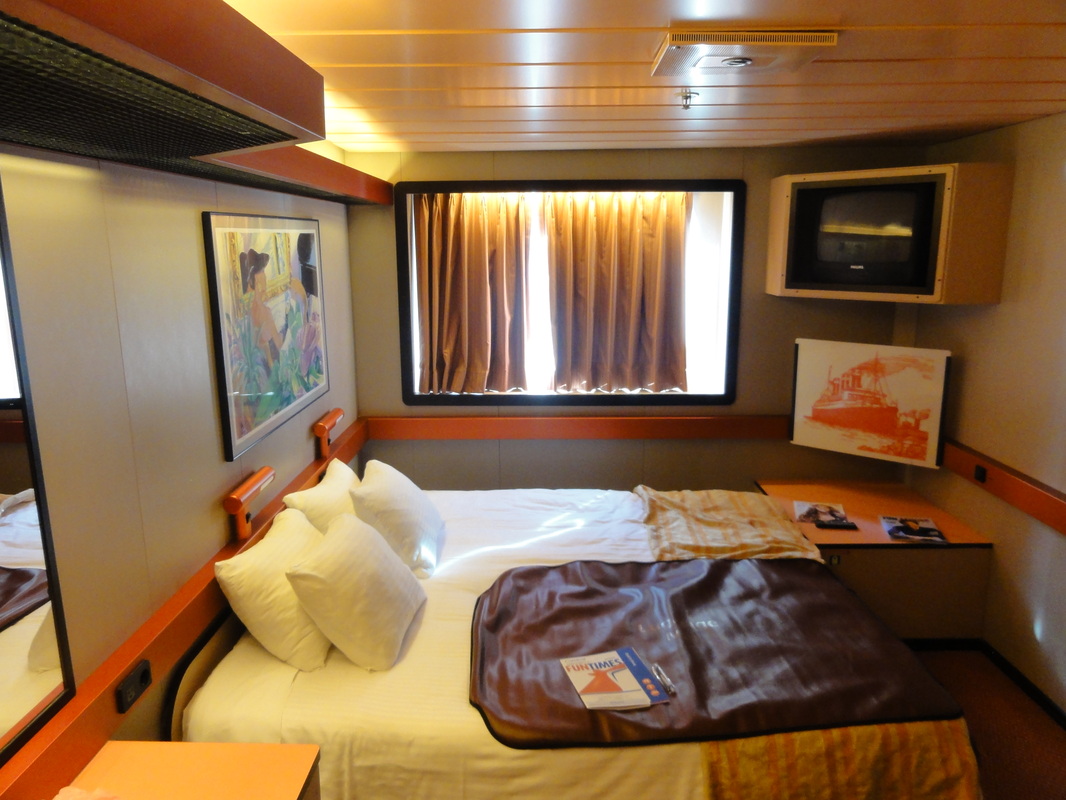 Carnival has recently come under quite a bit of criticism for the changes to their main dining room menus. (If you'd like to check them out, follow this link to a great cruiser site http://www.zydecocruiser.net/menus/new/5Day.htm ) Fried chicken is available daily, as well as hamburgers and other various comfort foods.  Some people believe that a cruise experience should provide fine dining quality food, and if you are one of those people, Carnival is likely not for you.  Sure, there are more adventurous items in the  "didja" category of the menu like escargot and alligator fritters, but the majority of the menu is written for those who don't really want to branch out. And why not? It is a vacation, and many people would be more comfortable eating foods they are familiar with.  The buffet continues this trend with the longest lines forming at the grill, which provides hamburgers, french fries, chicken nuggets and so on.  The 24 hour pizza window had a fairly wide variety of options, but seemed to only continually make pepperoni and cheese in order to keep up with the demand.

Our favorite food offering on Carnival ships, the ala carte dessert counter, was also on this ship on the Promenade deck. 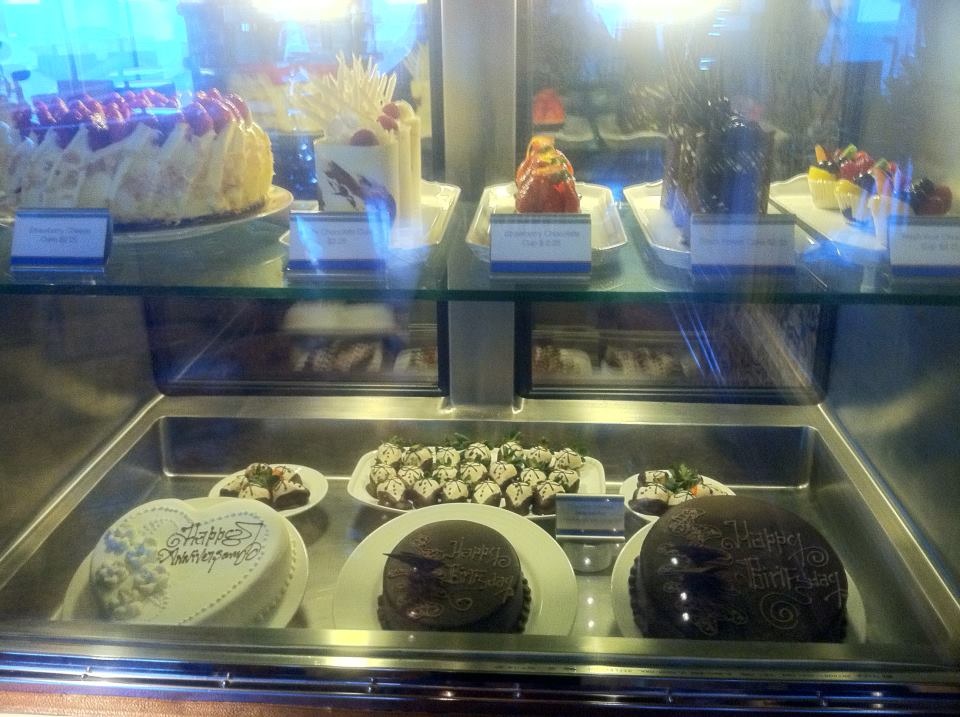 Heavenly slices of cheesecake, strawberry tarts, black forrest cake and much more can be had for very reasonable prices, and trust me: these are the best desserts on the ship.  The prices are around $2.25, and they also sell quality coffee and hard scoop ice cream.  Totally worth it! You are definitely NOT getting anything like this on the buffet.

We also tried the Chef's Table on this cruise, which is a $75, four hour experience which includes a galley tour and multi course meal.  It is limited to 12 people, and is supposedly Carnival food at its best.  We did not agree.  While the food was certainly well plated and looked like something off Top Chef, I really hope that the flavors are not indicative.  I will post a separate full review, but while there were some highlights, I do not believe this experience is in any way worth it. 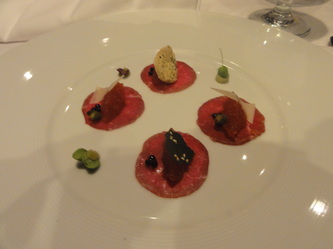 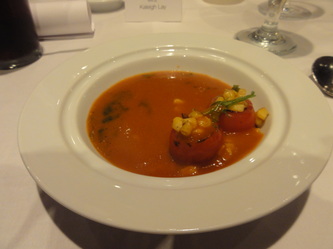 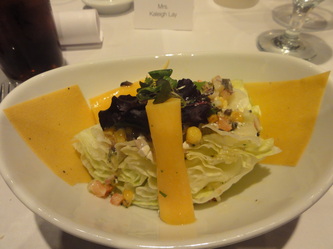 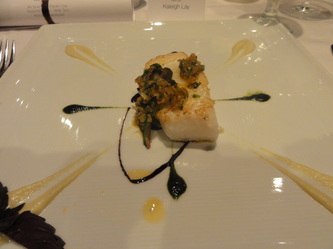 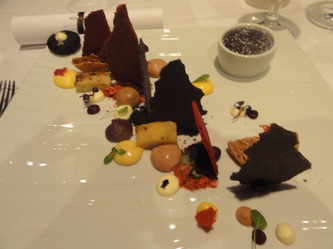 I found the service on this ship to be personal and amazing.  On the first day, we bought a soda package from a bartender at one of the many tables set up for that sort of thing.  Hours later, I walked up to a bar to get a diet Coke, and the bartender who sold us the package (who I did not immediately recognize) called me by name and asked where my husband was, again by name.  I sat and talked to him (John) and his lovely wife Mary Rose, also a bartender, for quite awhile and learned all about their child back home in the Phillipines and how they plan to retire from ship life in 3 years, then able to provide a better life for their family.  From that moment on, I sought out John and he continued to recognize my husband and I, sometimes from across the way.  He would be pouring our drink as we walked up, and even saved me from a muscle-head drunk guy a few nights later.

Service in the main dining room was also better than we have ever had in the past. Carnival does something that I have not found to be universal among the cruise lines: they try to seat you with dining partners which are of the same age and traveling situations.  For example, our table consisted of 4 couples in their twenties or early thirties, traveling alone. Now, what happened with our particular group must have been magic or something because we all got along so well that we spent the entire last two days of our vacation together, playing trivia and attending afteroon tea.  These people made our vacation great, and we made friends for life.  Our dining room server, John (another one), was a large part of that and really helped us all to click.  He was the type of server that you wish you always had, but usually don't.  He never forgot a special request or entree. He immediately noticed if you didn't like something and suggested a replacement.  Even the silly dances that Carnival makes them do were fun in John's hands, accompanied by stories of how embarrassed his wife was that he had to show off his horrible dance skills to cruise passengers. (For the record, he was a great dancer.)  In fact, that was likely part of our disappointment in the Chef's Table was that we missed that last evening of dining with John and our new friends.

The folks at guest services kept the bar high, remembering me by name after my first visit, and the cabin stewards were great as well.  Honestly, every crew member we encountered on this ship made our cruise better.


This is another area which receives some criticism, but we enjoy.  Sure, Carnival's shows and entertainment aren't Broadway caliber, but we didn't expect them to be. I think you have to go in with an open mind, just expecting a fun show with some good music and high quality dancing, and you will enjoy it just fine.  The story lines are silly or non-existent, and the dancers are outfitted in typical Vegas-style costumes, but they are actually really talented.  One thing Carnival has going for them is that they tend to select songs for the shows that the audience will actually know and be familiar with, unlike our experiences on some other cruise lines.

The cruise director was funny and engaging, and the entire entertainment staff was really a hoot with standouts like "Showtime" and "Crazy Chris".  I only wish trivia had been held in a location other than the drama bar, which is directly on the Promenade with little seating close to the microphone and has people constantly walking through.  Why not open up one of the many lounges, just steps away?  Another standout was the piano man who held two "Name that Tune" trivia games.  I only wish he had done more of them, they were so much fun. (And our guys team won in a complete shutout) The new towel animal show was a hit that is sure to please on every Carnival ship as it is added.  Puppeteer training by John Tartaglia.has paid off in dividends for this new addition, and you must see it.  Songs featured are: Girls Just Want to Have Fun, Splish Splash, and Celebration among other fun hits.

The new sports deck completes the entertainment offerings (unless you count BINGO) with a nice miniature golf course, basketball court and life size chess board.  The water slide, although older, was very popular, especially with the younger set.  Hot tubs on the main pool deck were full of kids, but the ones on the Serenity deck were often sparsely populated, especially toward the beginning of the cruise.  This Serenity deck has a nice feature due to its location on the aft of the ship: a beautiful view of the wake.  Be sure to hit this spot early as it tended to fill up as the cruise went on and people found it.  (Deck 8, down the stairs behind the buffet on Deck 9 or out the back door of the Cole Porter Lounge)

I will be the first one to admit that Carnival is not for everyone.  There are more people in shorts and casual clothing than on other cruise lines.  Many people have never cruised before and do not know much of the protocol.  We met a couple on the second night that didn't realize the main dining room was included, and decided to stick to the buffet anyway.  The food is not fine dining.  The shows are not comparable to Broadway.  But, at least on this ship, the staff we encountered were kind and helpful, and were always working to help make our cruise better.  This will always be one cruise that will stick out in my mind when I am feeling nostalgic for cruising. I will remember the friends we made and how Carnival perfectly met our needs and desires for that particular cruise.