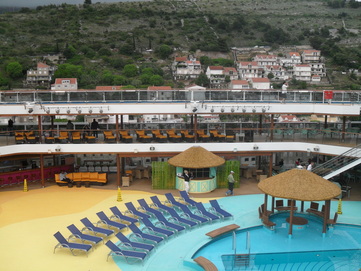 We were on the inaugural cruise of the Carnival Magic. Here is what we thought of the new ship.
Service- Our stateroom host was great. The room was cleaned twice daily, promptly and thoroughly. He was nice, greeted us whenever he could. I could really use him at home. The bar waiters were attentive, but not annoying or over the line. The bartenders were always nice and quick. We bought the coke package, and no one ever seemed inconvenienced at retrieving our multiple cokes. A couple even started pouring as they saw me walk up. The dining staff was good, not amazing, but on par with what we had experienced in the past. The waiter forgot items for my tablemate a number of times, but our orders were always perfect.
Food- We enjoyed the food overall. Surprisingly, lunch was often the best meal of the day. The burrito bar was great. Burgers and hotdogs were so-so, but with all the toppings, including the makings for cheese fries, were an addictive treat. The pasta bar at Cucina was quick and decent, though not mindblowing. James had what he called the best jambalaya ever at the lunch buffet. The steakhouse was somewhat of a disappointment. The steaks are good cuts, but you are limited to one item per course, which is more than most would eat, but it would have still been nice to have a choice of multiple appetizers and maybe skip salad etc. Dessert under impressed, which is unusualy for us. Breakfast was the most crowded that the buffet got, but you could pretty much get the same thing at what is normally the burger bar with far less line. The main dining room food was hit or miss, mainly good. My favorite food on board was the BBQ they did on deck on sea days, cooking fresh sliders, quesadillas, steak tacos and sausages.
Entertainment- The staff was amazing and will be one of the main reasons I cruise with Carnival again and again. They called us by name and made us feel like we were special just for showing up to the various trivia contests. We found the trivia/activities to be fun and different. We especially enjoyed SuperTrivia, which is progressive. As for mainstage, the singers were good, but there was only one big show, which was a spectacle, but didn't really have a storyline. It was enjoyable and impressive. We disliked every comedian we saw onboard. Not sure why. One in particular was just more insulting than funny (pretending to be a southern hick in Europe.)
The Boat- We loved the boat. The waterslides, the adult area, the minigolf, all the musical venues, the Red Frog Pub. This might be our favorite boat for our purposes. We will see if any other ship can beat it.  Entirely enjoyable.

Details-
Red Frog Pub- Has great atmosphere and theming. The bartenders are all Caribbean, and really add to the experience as well as the guitar player/singer who plays Jason Mraz-style music. I got quicker service at the bar than at a table. This place never really slows down. A free snack here is these little fried corn nut type things that were delicious. I tried the fried shrimp appetizer for $3.33 and was not disappointed. It was a good serving size, and even came with some fried plantains that I enjoyed as well. The sauce that came with it was a spicy/sweet that really complemented the shrimp. They take pictures of the patrons, so it is interesting/funny/horrifying to see your picture flash up on the monitors. There are also booths around the side if you prefer privacy. One of the things I LOVED about this place was the ability to talk to the people around you without having to shout over loud music. It is just a really easy place to waste some time.
Ocean Plaza- This is the common area on the Lanai deck where most of the trivia competitions are held. Most evenings a live band plays here, and there is a dance floor which was often used. Facing the stage, is a regular bar, a martini bar, and a coffee bar which has pastries, hard scoop icecream, and other snacks for sale. Each evening the martini bar featured complementary snacks such as shrimp puffs or nachos. On sea days, immediately outside on the deck is a BBQ, which has delicous, freshly cooked lunch. There are great little booths circling the stage in here, and the Fun Hub internet cafe is adjoining.
Spotlight Lounge- This is where the Superstar Live karaoke takes place, as well as the Punchliner Comedy Club. It is a large venue with alright sight lines. The live band is extraordinary, and we really enjoyed them throughout the cruise, wherever they played (The Magic Show Band). Their singer, Michelle, kinda coaches the karaoke people, keeping them on pitch as much as possible, but she is really great in her own right. How many people can sing "Forget You" and "I Believe in a thing called Love" as well as motown hits without sounding out of place? She did a great rendition of "Rollin in the Deep". The comedians were slightly disappointing, but to be fair, I only made it to the 'family friendly' shows, which may have restricted them from doing their best material.
Sports Square- This section is Aft deck 12, and is pretty interesting. It includes the two deck mini-golf course, a basketball court, some sports equipment/ obstacle type course and the ropes course as well as a bar. We did the ropes course and played mini-golf. The ropes course doesn't really look scary from below; it is only about 12 feet above the deck, but (for me) was much scarier when you are actually up in the air, hooked to a harness. James zipped around the course like he owned it, but I was fairly terrified and really had to summon all my bravery to get through it. There are two tracks around the ropes course with about 6 stops where you can choose the easier or harder track. Bet you can guess what I picked. The mini-golf is pretty good and we really enjoyed it.
Serenity Deck- The adults-only deck, known as the Serenity Deck, was certainly popular with some people. As we are not folks who normally like to sit around in the sun, we had limited use of the deck, but did manage a few hours up there once we managed to snag a seashell lounger. There are a few different types of loungers up here: the hammock (padded), double lounge chairs, regular lounge chairs and the seashell. The seashell is the "coolest" one as you can totally block the sun with the awning, it is padded, has throw pillows, and can seat two people very comfortably. Actually, they can lay down, and they did. Several times we walked around this deck, and there were couples sleeping in these things. I don't get it. Sure, it is nice to sleep outside with the ocean, but it isn't as comfortable as your stateroom. We read up there a few times and really enjoyed that. It is quiet, good service and just peaceful and comfy. One funny thing: there were several Russians on our cruise who thought this deck was clothing optional, and the staff did nothing to stop them. Oh, there is a hot tub up there as well, which we did not care to venture in with the topless Russians.