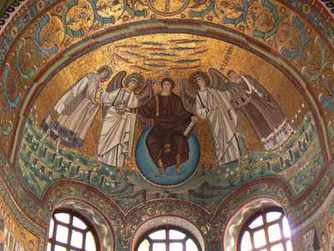 Getting to Ravenna- Shuttle buses run from the port to the center of town. It is also a 20 minute walk. This town is so easy to walk around. It feels like a true glimpse into small town Italy. The tourist information office is just off the main square (on the street at the back of the piazza on the left). They will give you a good map here, and you will likely need it. I don't know why, but we felt more turned around in Ravenna than we did in most of Italy. It isn't that big, just confused us. It is a really good walking city, but keep an eye out for the bike paths and bicycles everywhere.


What to Do/ Attractions- There are two different combo cards that you can purchase for the mosaics of Ravenna. They include different things. One includes the Basilica di San Vitale and the other includes the Sant'Apollinare in Classe. The one you want is the first one: be sure to ask. It would be a shame to go all the way to Ravenna and not see the most famous site because you bought the wrong ticket.
The combo ticket you want is 11 euros and comes with admission to:
Basilica di San Vitale, Mausoleum of Galla Placidia, the old Baptistry, Sant'Apollinare Nuovo, and the Archaeology Museum.
Some of these sights are better than others, but combined, they are certainly worth the 11 euros and are all within easy walking distance.

Basilica di San Vitale- 6.50 euros (or included in the combo pass) Open 9-7 April-Sept and 9-5:30 March and April. Closes at 4:30 in the winter. Amazing site and oldest church in Ravenna. Back when Ravenna was the center of the Roman empire, the church was still united with the Eastern Christians in Istanbul and mosaics were church art. Lucky for us, mosaics (being glass), hold their color and last longer than most forms of art. What results is a stunning collection of beautiful mosaics all over this ancient church. It dates from 525, and inspired Charlemagne so much that he built his castle in the same manner with the eight sided construction.

Mausoleum of Galla Placidia- Only viewable through combo ticket. Open 9-5:30.  Back in the 400's when Rome ruled from Ravenna, daughter of an Emperor and half-sister of another became the regent ruler when her half-brother died and her son was too young to rule. She was very powerful and tradition holds that she, her husband and son are buried here, though scholars aren't so sure. She did commision the building, and it is spectaclar. Cole Porter reportedly wrote "Night and Day" after visiting the mausoleum.

Dante's Tomb- Free. Faily small, but easy to tour and to walk to. Many people think that Dante is buried in the Santa Croce church in Florence because he has a huge memorial there, but when he died in Ravenna, he actually wasn't popular there and was buried in Ravenna. Later, when Florence changed its mind, Ravenna hid the body for awhile in order to keep it there.