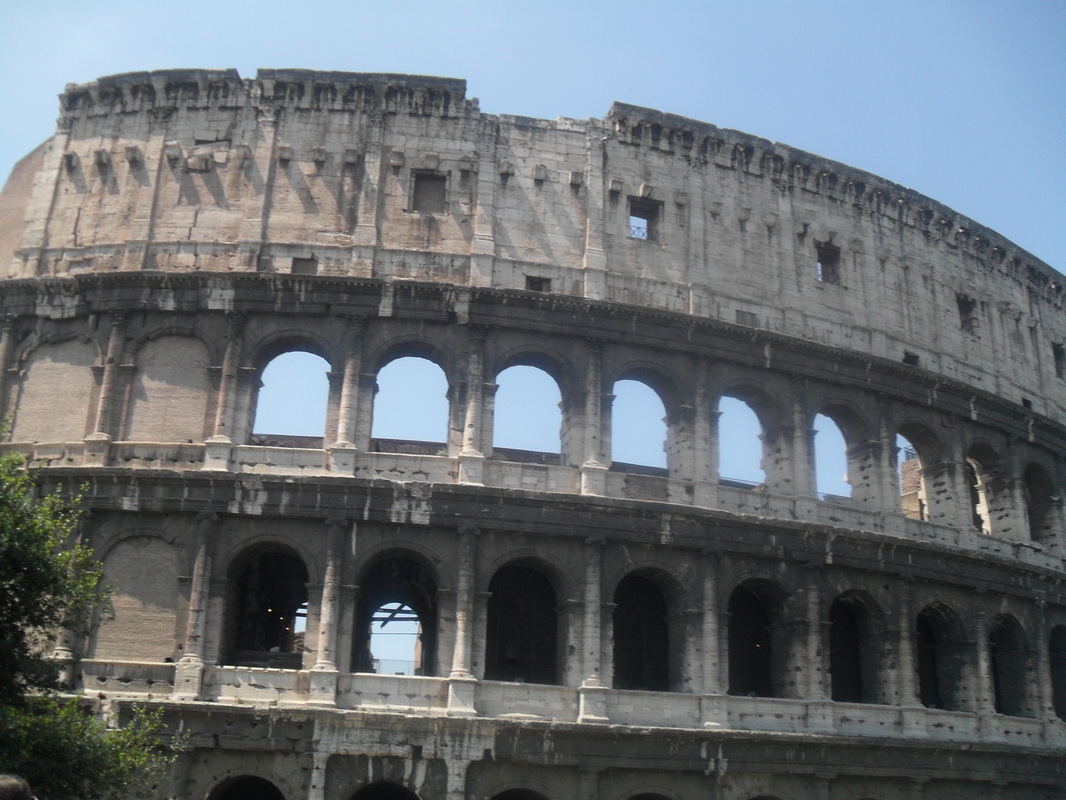 When one dreams of visiting Rome, the image of the Colosseum in their head is almost inseparable from the city itself.  Like Big Ben in London, the Colosseum is practically an icon of Rome itself.  For most of us, the movie Gladiator and that Britney Spears/Beyonce/Pink commercial make up what we know and think of when the Colosseum is mentioned.  With all that fanfare, this ancient sports stadium certainly has a lot to live up to. But does it?

As a first time visitor to Rome, no doubt the Colosseum is on your list.  Why, there is even a saying "like going to Rome and not seeing the Colosseum," so I don't blame you.  It was on my list, and it should be on yours, but for me, expectations were a little higher than the reality.  First things first, admission to the Colosseum is included in a combo ticket which includes Palatine Hill and the Ancient Forum for 12.50 euros.  The ticket can be purchased at any of the sites and, you guessed it, the Colosseum is the most crowded site.  Palatine Hill is the least busy ticket window by far, and likely the only folks purchasing tickets along with you will be Rick Steves devotees. It is a bit of a hike from the Colosseum, but totally worth it.  Here's how you get there and avoid wasting time walking around for 20 minutes like we did:

There is a busy road next to the Colosseum.  The Arch of Constantine is parallel to that road. You need to walk away from the Colosseum, perpendicular to the road as if processing away from the Arch.  About 1/10th of a mile down on the right is the entrance to Palatine Hill. There should be some gelato and food carts nearby.  After your tickets are in hand, hoof it back to the Colosseum to skip in front of all those people still in line for tickets.  You can also reserve tickets online for an extra 5 euro a piece.

Once past the ticket line, there is still a security line, but it goes pretty quickly.  After that, you are on your own to enjoy.  So, how do you do that? Well, some people swear by hiring a guide, and I'll admit that this is one of those places that is probably more fun when you are hearing stories of its history.  There are a bagillion guides outside the Colosseum, waiting for you to hire them which has a double purpose of letting you skip that line as they already have tickets, but they do vary greatly in price, so be careful.  If you pay extra for a Colosseum sponsored tour, it is an extra 4 euro.  They have audio tours as well for an extra fee.  Rick Steves has a free audio tour available through his site or iTunes.  Either way, you need someone who knows something about what happened there explaining it to you, or it can be a bit anticlimactic. 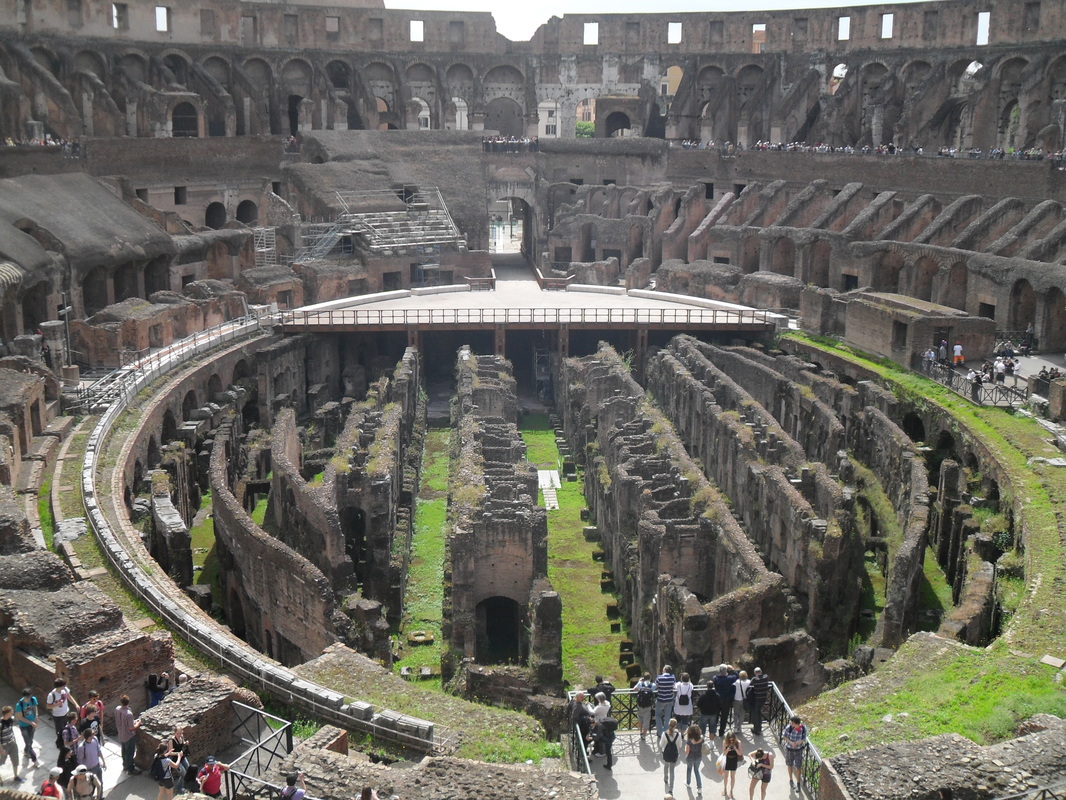 I think that for me, the best word to describe the Colosseum is anticlimactic.  The outside of it is amazing, and that first view of it from the metro station or the street will stick in your brain forever, but once you are inside, the luster is wearing off and it just can't compare to the outside.  Granted, they have begun allowing visitors down in the area below where gladiators and animals used to wait to be elevated up to ground level.  That certainly helps, but other than that, it is a really, really old sports stadium.  It feels almost exactly like entering on of our modern football arenas, and you can see the areas where they sold souvenirs and food.  The really cool things about the Colosseum require a bit of imagination.  For instance, they used to flood it and stage sea battles
for spectators, and there was once a grand awning which was like a retractable roof.  Of course, just taking in the idea of all the people who died there is quite dramatic as well.  All that is not to say that it isn't worth it or that I didn't enjoy it, but there were things I enjoyed more and somehow it didn't quite live up to expectations.  What you see is nothing more or less than what one expects to see after being bombarded by images of the Colosseum for most of one's life.

My best advice: take as much time as you need to enjoy, but don't stretch it out.  The Forum and Palatine Hill are excellent sites as well and are far less crowded.  Oh, and do not leave without an excellent photo of yourself in front of the Colosseum. 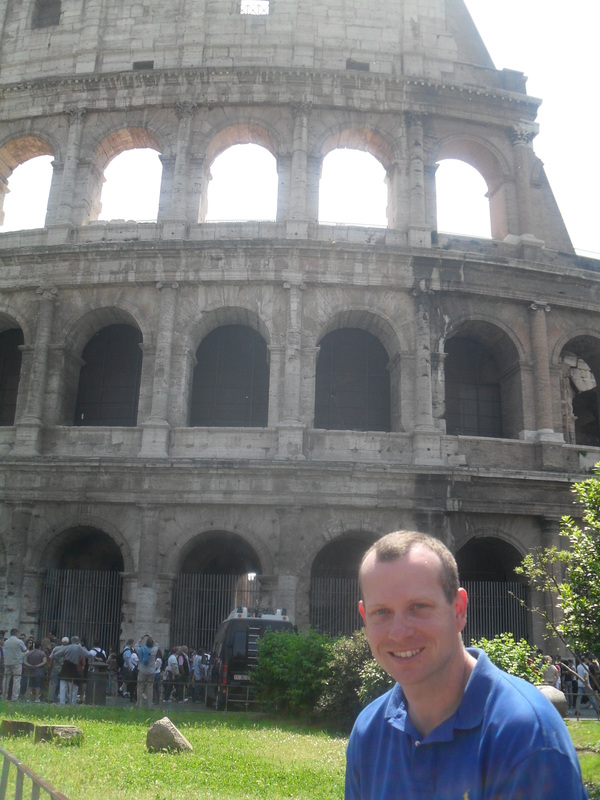