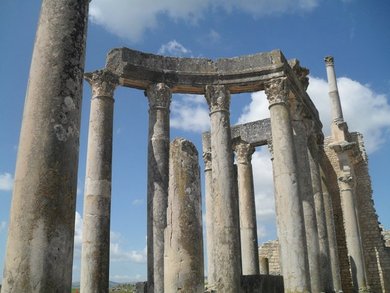 Before I tell you what I thought about Tunisia, I will let one of our tour guides from that country tell you about it. Since the cruise when we met Tarek, he has become a dear friend. The special thing about him is that he took the time to really help us understand his country. He answered questions, even ones that were probably stupid, and is one of my favorite memories of Tunisia. English is Tarek's fourth language (I think), and I considered cleaning up his grammar, but decided to leave his letter just the way he wrote it. Hopefully it will give you some insight into this intriguing country.

Am a tunisian tour guide, just want to tell you about tunisia and give you some advices, so tunisia it's a small country but it has more than 3000 years of history and civilisation, that's why we have many monuments from at least the 9th century b-c, and these monuments are conserved and everybody can get in,the most famous ones are in carthage one of the oldest cities in tunisia from the 9th century b-c as i said, and the famous coluseum or the amphytheater of EL JEM wich is the same in Rome but much conserved, when you will get there you will feel like you are watching the gladiator film,more than that the village of Dogga also one of the oldest city in the country. In addition there is a lot of panoramic sights in Tunisia especailly in the wonderfull village of Sidi Bou Said, known as the blue and white village, it's called like that cause everything is painted in blue and white, you will like it especially when you get into the market there is a lot of shops where you can buy some souvenirs or some gifts for yourselves, but be carefull from people walking with some products they are not a good quality so if you want to buy somethings just go to the shops and negociate the prices because it works like that in tunisia, when we go to the market we have to negociate with the shoper and when he gives you a price start by the half of the price as a negociation ok. then after that we have the old city of tunis there we can find the old style of palaces and houses with different architectures, you can find islamic style christian style and maurich style, and the beauty of traditional clothes and souvenirs, the magic of colors, and the organisation of the "souks" or market cause there is a seperation between every product like jewels, this products you can buy it only from the shops of "the medina" or the old city of tunis cause there is the oficial local of jewels shops. and you will see how it's wonderfull there. And of corse i can't forget the leather market, an other popular part from "the souk" with bags and other products with different colors.so these some information about my country if you need a tour guide just contact me by e-mail: dhif_tarek@yahoo.fr or on facebook with "tarek dhif" with the adresse: tarek2203@hotmail.fr  thanks for your attention,i hope a nice trip for you in all over the world.thank you so much for your time. "TAREK"


Overall- B+ Exotic, amazing sites, and beautiful architecture must be weighed against the difficulty with public transportation, the distance to Dougga, and the possible complications of going it on your own.

Ease of Travel- Taxi drivers are plentiful, but problematic. Stories abound of those who got ripped off by taxi drivers. Not only that, but if you do try to make your way to the train station, they will likely attempt to stop you with either lies about your inability to take local transportation or currency issues. If you were able to make the train, you must still conquer the city of Tunis on foot or find our own way around Sidi Bou Said. And Dougga, which we consider to be one of the best attractions in the Mediterranean, is unreachable except by car rental or private guide. While we are all for doing ports on your own, hiring a guide or doing a ship excursion in Tunisia will probably give you a lot of peace of mind and help you to have a better, less stressful time.

Quality of Sites- Carthage is probably the most popular because people have heard of it, but this is not the Carthage they have heard of because, if you remember from history class That one was salted! Yep, defeated and earth salted so the city couldn't grow back. This one does include some old ruins, but they are kind of placed throughout the city and some of them were moved from their original position. Dougga, on the other hand, is a very old city of ruins that is out in the middle of nowhere and is AMAZING. It is largely untouched, and impressed us more than Pompeii. Sidi Bou Said is a seaside village of blue and white and is also very popular. In addition, they have the largest mosaic museum in the world. We can't wait to go back to explore more of Tunisia.

Safety/Comfortable- Okay, so I can't really say that I ever felt comfortable in Tunisia. There is trash on the ground, more than Naples, and a fairly visible police force. (Good and bad, I guess) You also have to be mindful of the traditions where women are concerned as Tarek had to convince a coffee shop owner to allow the women on our tour to use the restroom. Restrooms... no seat, likely no paper (I brought some) and sometimes no sink as they use a small water spicket to hose off one hand. (I'll leave it to your imagination as to why) Without a tour guide, I would have not only felt like a fish out of water, but maybe even like a fish in space. Good private tour guides like Tarek can help immensely in this area as noted above, but also in circumstances like shopping in the souk, eating etc.

Food- Think couscous and middle eastern style cuisine. Personally, I like it. In Tunis itself, there are also some American fast food places if you aren't adventurous. Usually lines don't dock too long in Tunis, so you also have the option of waiting until you get back on the boat. Do try to taste a pastry as they are known for their use of honey in desserts.

My 2 Cents- I look forward to going back to Tunis and hiring Tarek to take us around and show us his country. But, if I didn't know him, I would be slightly unsure of whether to pile on a shore excursion bus or to hire someone blind. One thing is sure, this do it yourselfer will NOT be doing Tunisia by herself.