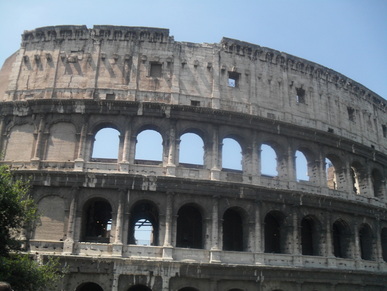 Arriving and Getting Around-
Please don't pay for an excursion just to get you to Rome!  It is so easy and cheap, I think every traveler should do Rome on their own.
The train from Civitavecchia is an easy way to get to Rome.
First, you take the free shuttle from your boat to the front of the terminal. It should be parked right outside the boat.
After the shuttle, walk out of the port and cross the street. Take a right and walk about 10 minutes. You will easily reach the train station on the left.
Once inside, you can either buy your ticket from the worker.  The ticket you want to purchase is called the BIRG, and it covers your trip to Rome and back as well as buses and metro in the city. It is 12 euro and it is an excellent value.
Remember to validate your ticket by stamping it in the yellow box before you get on the train.
The first stop in Rome is near St. Peter's and is called Roma S. Pietro, and it takes about 50 minutes to get there from Civitavecchia. The other stop that you might want to wait for is Ostiense, which you can utilize to get to the ancient sites.
From there, you can take adjacent Pyramide metro station, B (blue) line in the direction of Rebbibia 2 stops and be let out across the street from the Colosseum. (Colosseo stop)
The main station, Termini is close to the Spanish Steps and can also get you to the Colosseum via the metro. You would look for the M or Metro signs when you get off the train, then look for the Blue line in the direction of Laurentina. Two stops up is the Colosseo stop, which lets you out across the street from the Colosseum. It takes about 1 hour 20 minutes to get to this station from Civitavecchia.
The bus you want to take to St. Peters is #64. The most centrally located stop is on Vittorio Emmanuel II near Piazza Navona.
For our opinions on Rome, visit our Rome Port Review Page.
And to hear our podcast specifically on how to do Rome on your own, here is the link "Episode 4: Rome on Your Own"
Attractions/ Things to Do- In Rome, generally speaking, certain attractions are grouped together: The Ancient Sites, The Pantheon and Trevi Fountain, and The Vatican Sites. I will cover the biggies, but just know that there is WAY more than I have listed here.

Colosseum- Famous gladiator arena. Cost is 12 euros which also includes the Forum and Palatine Hill. Open 8:30-7:00. To purchase in advance on the internet, visit this site. It is 13.50 in advance. Ticket lines tend to be long at the Colosseum, so either buy in advance, or purchase your tickets at the nearby Palatine Hill which is less crowded. Rick Steves' free mp3 audio guide to the Colosseum can be found here. You can also download this for free on your iTunes account just by searching for Rick Steves. These podcasts are very informative and can save you a bundle in guided tour fees. I found it more impressive on the outside than the inside.

Roman Forum- Ancient ruins, can look like a bunch of columns if you don't know what you are looking at. Included in the price of the Colosseum. Open 8:30- one hour before sunset. I suggest you look at a map of it ahead of time, download or hire a guided walking tour, or purchase the book Rome: Past and Present from one of the street vendors. (Runs 11 euros, 25 euros with DVD, but haggle to get a lower price.) Really great if you know what you are looking at.

Palatine Hill- Where the palaces of emperors stood and where Rome was born. Included in the price of the Colosseum.Open 8:30-7:00. Again, do your research to make this visit worthwhile. I may sound like a broken record, but Rick Steves' Rome book has been irreplaceable in my planning of this trip. He includes a map and walking tour of Palatine Hill and most attractions in Rome. Very large and time consuming to walk around.

Pantheon- Free. Open 8:30- 7:30. Only ancient building in continuous use since being built, so extremely well preserved. A must-see!

Trevi Fountain- Free. Famous and beautiful fountain featured in the movie "Three Coins in the Fountain". Legend has it that if you toss a coin in, you will return to Rome. Very crowded and not as impressive as it is popular.

Vatican Museum- 15 euros. Open 9-6 (last visitors admitted at 4) Lines are long, but you can purchase them online for an added 4 euro booking fee. One of the best museums in the world featuring the Sistine Chapel, the Raphael Rooms, ancient mummies and more. Rick Steves' guided audio tour for the Sistine Chapel can be found here. And a detailed walk-through of the entire museum is in his book Rome 2010. To get to St. Peter's without having to walk all the way around (over a mile), exit the door in the Sistine Chapel that says "For Guided tours only". It will let you out right next to the Basilica door. HUGE museum. You cannot see it all on this one day, so hit the biggies and speed through the rest. Your feet will die if you don't.

St. Peter's Basilica- Free. Strict dress codes. No shorts or shoulders. Open 7-7. Free guided tours every 90 minutes. Featuring Michaelangelo's Pieta and dome. Rick Steves' audio tour can be found here.  Again, his books that cover Italy feature a map and walking tour of the church.  The crypt containing most of the tombs of the Popes is also free and can be entered by exiting the front of the church and heading to the right near the line to go up in the tower. Look for signs to the grotto, and you will find it. You can even catch a glimpse of Peter's resting spot.

Basilica di San Clemente- Church is free. Excavation area 5 euros. Open 9-12:30 and 3-6.  A twelfth century on top of a fourth century church on top of a pagan temple and a first century Roman house which may have actually been St. Clement's (3rd pope) home. Very close to the Colosseum and totally worth it. One of the coolest things we have ever seen and, actually might be our favorite site in Rome.

St. John Lateran- Free. Open 7-7. Closes at 6 in winter. Originally built in the 300's shortly after Christianity was legalized, but most of the current structure is from the 1500's. Has bronze doors from the original Roman senate and gold capitol and columns from an ancient Roman temple from the forum. It also is said to contain the heads of Peter and Paul and is the actual cathedral of Rome. The pope must come here to ascend to the position. In the building to the right of the church, are the stairs from Pontius Pilate's house which St. Helena brought back from the Holy Land that Jesus climbed before his cruxifiction. Pilgrims can climb the stairs on their knees (it really hurts) and see blood spots that are supposed to be Jesus'. Close to a metro stop.