Royal Caribbean's Voyager of the Seas 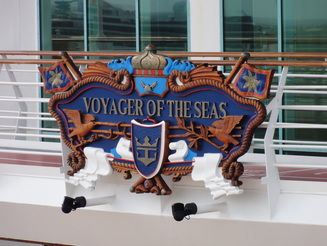 As always with our reviews, these are our opinions, and you may disagree with everything we say.  We will strive to provide as much detail as possible in order for you to compare your tastes to our experience and judge for yourself whether our concerns would be yours.  So, here we go!

Ship Layout: The Voyager of the Seas is the first of the Voyager class ships for Royal Caribbean, and was the largest ship in the world when it was released. It is still one of the largest ships in existence and is still quite impressive. 3D models of the ship, strategically placed as well as deck plans by elevators help you find your way around, but this large a ship can be difficult to find your way around.  Even 3 and 4 days in, I was still reminding James that the dining options were at the back of the ship and most of the entertainment was forward.  Some places in particular like the sports deck are difficult to find, and despite the high guest space ratio, popular areas like the Royal Promenade still draw extremely large crowds.  You can definitely find a quiet place to yourself at one of the many bars or outside on the promenade deck.  But, when everyone on the ship wants to be in the same place like the pool deck, buffet or the aforementioned Royal Promenade, you will feel the the large number of people. The Royal Promenade is especially cramped in the evenings when they roll out the watch displays etc from the stores and everyone feels the need to walk back and forth in their dinner dress.  Buffets hit their peak at late breakfast and lunch on sea days.  Sometimes I couldn't find a seat at all inside the buffet.  The adults-only area is in an unfortunate place at the front of the ship between the main pool and the forward elevators and gym, forcing you to walk through that area on a regular basis.  It is also entirely enclosed on the sides and above except directly over the pool, due to it being on Lido deck.  This makes adults-only sunbathing difficult and enjoying the sea breeze impossible. 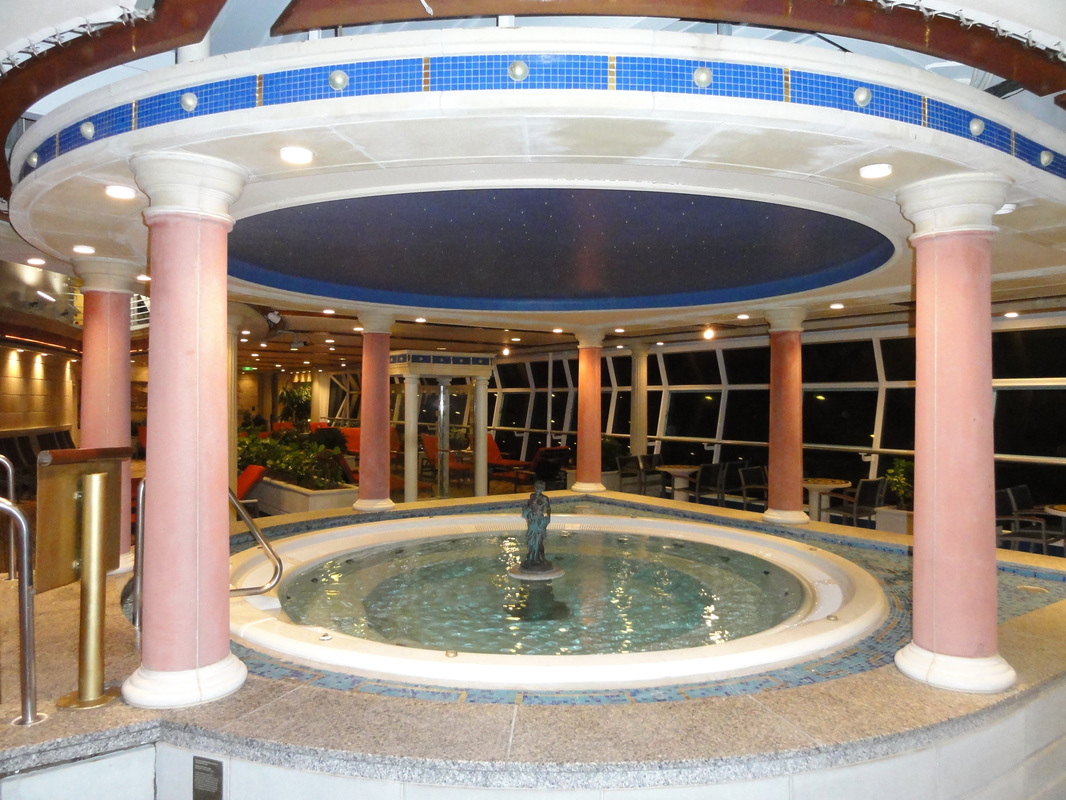 The adults-only area, which is almost completely enclosed
Staterooms:  Most staterooms still have the old picture tube televisions, and the design is somewhat dated, in my opinion.  Still, the space is adequate, if small.  Balconies on the 6th floor are white walls, rather than rails, making it impossible to watch the sea while sitting down.  Beds are comfortable, and the shower had good temperature and water pressure.  Wooden drawers with no handles or varnish felt a bit cheap, but were functional.  Lighting was good with individual lighting over each pillow. 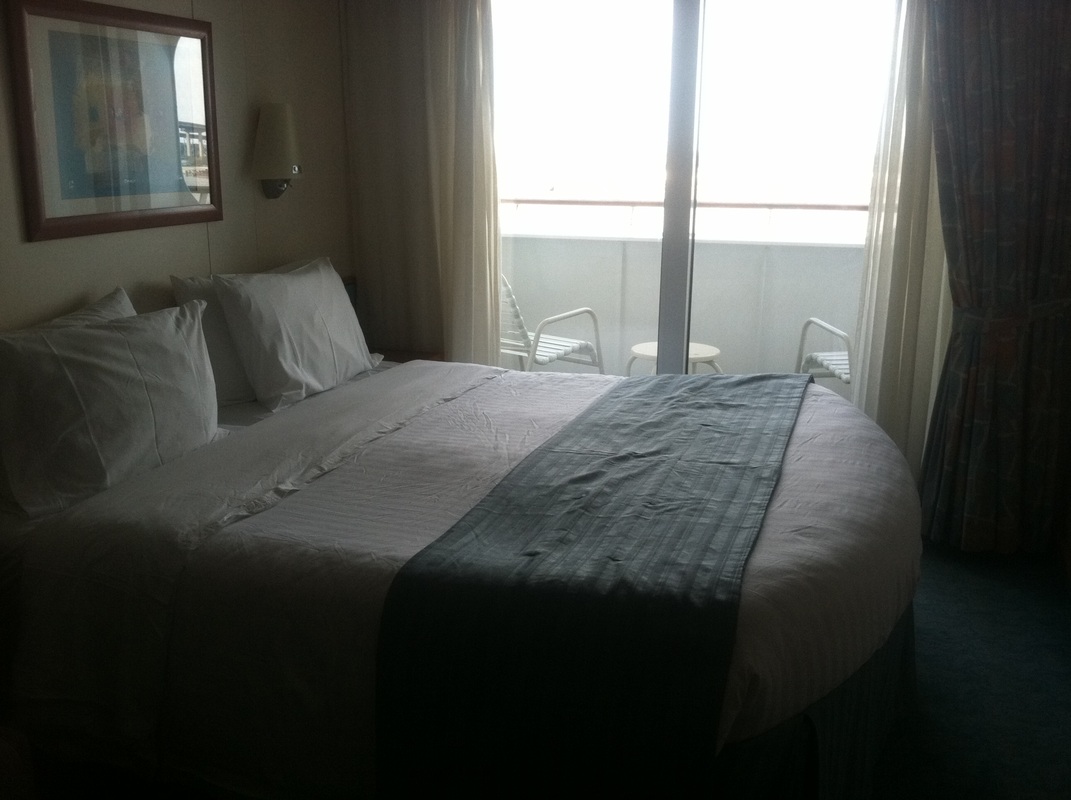 Food:  Weirdly enough, food is somewhat scarce unless you are willing to pay extra.  Cafe Promenade is the only 24 hour venue with pizza, sandwiches at lunch, and desserts always.  Pizza is okay, but goes quickly and the wait can be a little while.  Desserts were better than I expected, especially the tiramisu.  The free coffee was too bitter for my tastes, and I didn't try the coffee for an extra charge.
The free burgers in the buffet at lunch were terrible with the cheese not melted on top and hardening buns. Hotdogs were slightly better, but that is to be expected as hotdogs can handle sitting longer.  The rest of the lunch buffet felt on par with Ryan's perhaps, without the fried chicken.  Breakfast on the buffet was really good with Burger King-style hash browns, quality croissants and an omelet station.  The dinner buffet was usually about the same quality level as the main dining room with one side sporting a different ethnic cuisine each night.  It was also considerably less busy and peaceful.
The main dining room food varied from alright to pretty good, with few exceptions in either direction.  Creme brulee was absent from the menu, as was any good chocolate dessert except for a flourless chocolate cake in a trio.  The menu was not especially exciting or appetizing, and I usually found myself choosing the best of mediocre options.  Honestly, if I were planning to diet on any cruise, I would choose Royal Caribbean as I wouldn't be missing a whole lot if you know what I mean.  Lunch in the main dining room was okay, with a salad bar and a decent menu.  The burger was great, but the hassle of the long lunch in order to get it probably wasn't worth it.
Portofino was a pleasant experience with high-quality food and a relaxing atmosphere. The service was spot-on, and it was a nice change from the main dining room.  I recommend the shrimp risotto and the dessert sampler.
Johnny Rocket's was enjoyable enough and probably worth the $4.95 surcharge, but watch out for the fries and onion rings you are served to begin with.  They can really fill you up fast, leaving little room for the rather good burger.  I enjoyed the apple pie, but James was unimpressed with the Oreo dessert.
All in all, there weren't really enough appetizing options for me on the ship, and I often found myself wishing for another quick service venue of some sort on Lido deck. 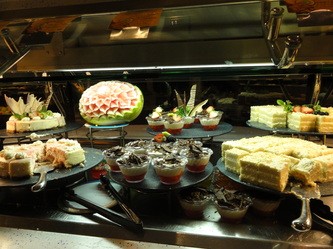 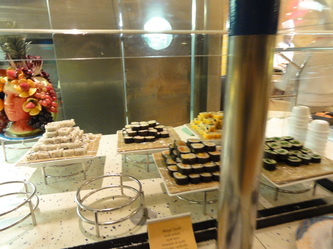 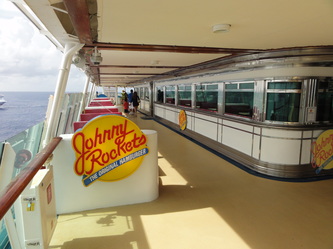 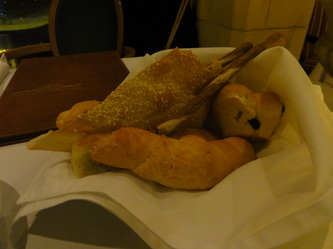 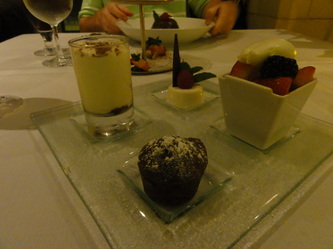 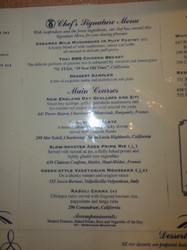 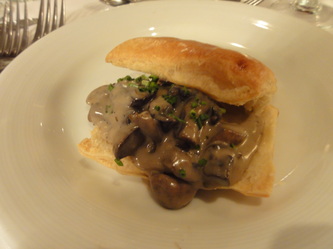 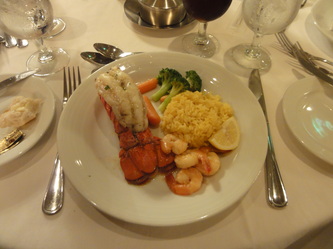 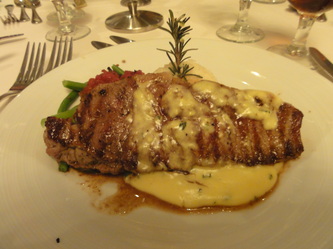 Service- The service was near perfect in the main dining room and at Portofino with servers promptly filling beverages, including sodas for those with the Coke card, and a neverending supply of bread.  Extra entrees, appetizers or desserts were brought without so much as an eyebrow raise (in the main dining room; extra entrees in Portofino cost extra) and sometimes the servers even brought extra dishes without being asked, just because they personally liked it.  They remembered our names and drink orders, even though we had My Time Dining and might not have them as servers again.  In Johnny Rocket's, the service was fun and friendly, but not overwhelmingly memorable.  Elsewhere, in bars and on the pool deck, the service was adequate with some being better than others, but never chatty.  You get the feeling that the bartenders are told to serve the customers with a smile, but not to engage in conversation.  The stateroom steward was efficient, always seeming to know when we were out of the room, even though we didn't see him around.  He made towel animals on 3 nights of the 7 day cruise.
Entertainment-  We tend to be very active on the ship, so this category will cover not only nighttime entertainment, but activities throughout the day.  Trivia is abundant, but highly attended with serious (sometimes too serious) players.  On port days, many trivia contests take place when the ship is in port, making it difficult to attend.  There was no progressive trivia, but there was a new interactive trivia which utilized the LED television and remote control type devices for each team.  It was a lot of fun, and will be great once all the kinks are worked out.  The rumor is that all trivia on Royal Caribbean is heading to this interactive method.  Prizes are great and range from passport holders to coffee mugs and umbrellas.
There was only one drink tasting and one cooking demonstration on our 7 day cruise.  We were unable to make the drink tasting, but the cooking demo, a cross between a comedy routine and an actual cooking demo, was fun and tasty.
The nighttime shows were entertaining with the Beatles tribute band, Revolutions, being the best one.  Their set is very professional and entertaining with great costumes and amazing talent.  I would mark it as a "do not miss" on any Royal Caribbean cruise they happen to be on.  The other shows ranged from enjoyable to just weird (the movie song themed production show was almost exclusively unknown movies).  I would make a point to attend each show, if only because there is usually nothing going on after them.  One night, they did the marriage show, but other than that, adult entertainment was lacking with only dance parties to attend instead of the usual comedians or karaoke.  They did do a toga party on the second to last night of the cruise, which featured boiled crawfish and other southern specialties up on deck at 11:00 pm.  Again, though, it was a dance party. 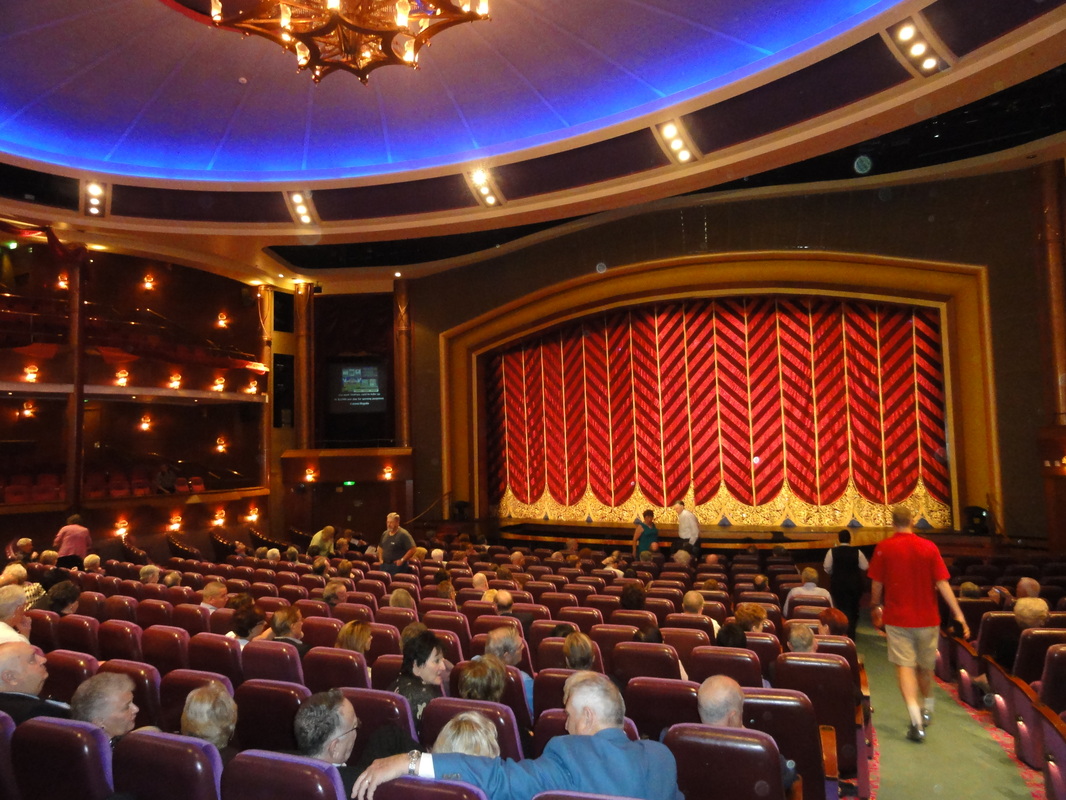 La Scala Theatre
Miscellaneous Thoughts- I felt that many of the things that Royal Caribbean touts as being a big deal on this ship like the ice skating rink or the rock climbing wall were not open enough.  I understand the difficulties with having enough entertainment personnel to run them, but if those are the things you want to hang your hat on, they should be open more than a couple hours here and there.  The mini-golf course needs better barriers and was often packed, which became frustrating as just a slight overswing could send your ball onto someone else's green.  Bars were also closed more than you would figure, although closed bars make for a great deserted reading spot.  I was mystified by the lack of karaoke since they have such a great venue for it at Cleopatra's Needle.  I often found myself wanting on this cruise, whether it be for more live entertainment or more food choices.  Make no mistake, this is a great ship, and on a busy itinerary I would say that it would fit the bill perfectly as many of these issues are less important when you have an exciting port to visit every day.  I would recommend it wholeheartedly for Europe, Asia or any other port-filled itinerary.  For the Caribbean, one must decide what is important to them. If abounding food options and comedians etc. are important to you, perhaps this isn't the cruise for you.  If, on the other hand, a really nice and impressive ship with professional service is more what concerns you, the Voyager of the Seas is a great choice. 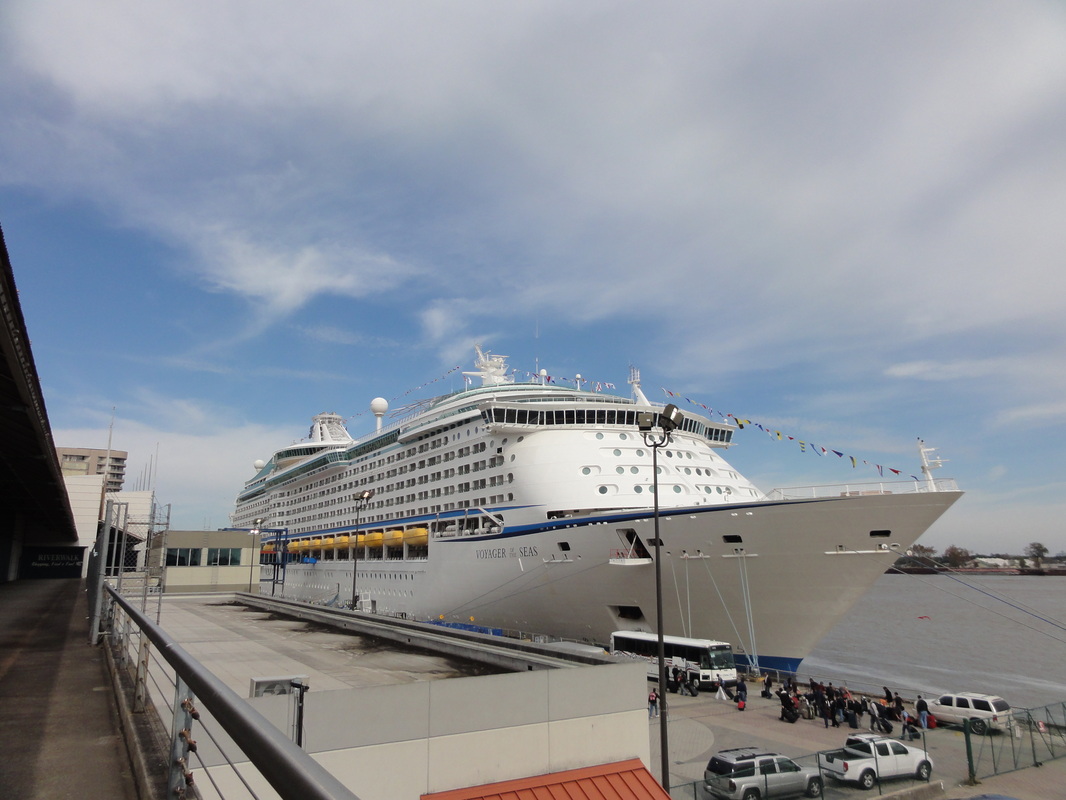